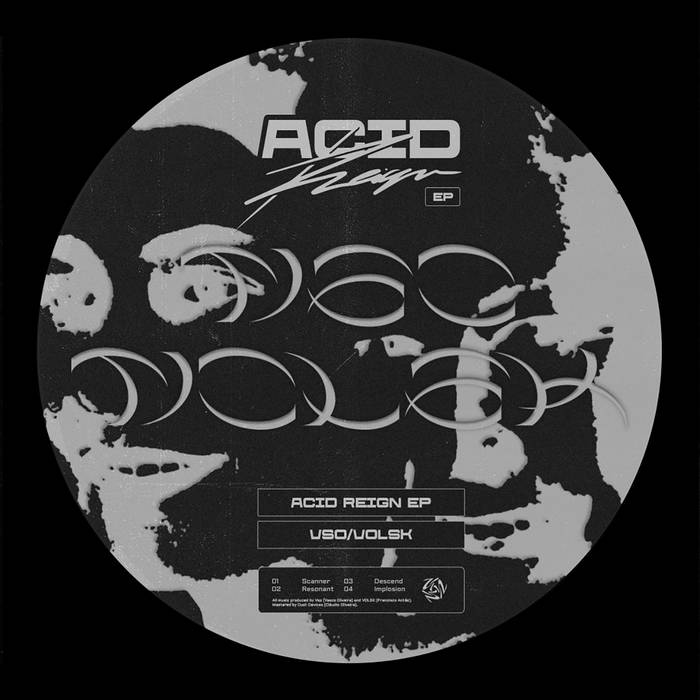 VSO aka Vasco Oliveira (Matosinhos, 1997) started out in music autonomously and never dwelled in formalities. In his unique trajectory, he joins the band Summer of Hate in 2016, known for pshycadelic rock and shoegaze, and in 2017 starts going by the name of VSO. Since then, he shares online authorial tracks of acid, breakbeat and ambient.

VOLSK aka Francisco Antão (Porto, 1994), stands out with his already advanced musical education. Alongside his academic path, he’s produced electronic music as VOLSK since 2013, yet only began to share it in 2018, with the self-published Gliding Blade. In the same year, Francisco announces Domestika, a project with dj and visual artist Mauro Ventura that, to this day, remains exclusively live.

Acid Reign ponders an encounter between two ways of being and living (music). And does it in a radically raw way and at the speed of our world. It lives from the coincidence between the violence of the kick and the con- temporary search of fluidity, body and intuition. The electro and techno-acid that exhale from this EP meet the layered world in which they both live in.

Although they nurture a friendship since 2015 - time when both took part in a musical project - they had only worked together in a singular occasion. It was, interestingly, an invitation from João Soares, co-founder and editor of Mera, for the last set of Prolifera #2, that triggered this collaboration. The approximately 6-hour long jam that answered that call, jumped out of the party to be materialized in an album. Produced for a 4 am live set, Acid Reign is to be enjoyed with low lights and a warm body.

The encounter occurred in this spontaneous session served the best of both worlds. The two artists joined the machinery and delved in an experimental and intuitive process. Francisco’s tendency to smooth the rough edges was challenged by Vasco, that insisted upon keeping the fruit of the collaboration ‘natural’. The absence of computers and the passion for the limits of an instrument allowed the performative nature, essential to a live set, to shine through.

crossing the worlds of electronic music and digital visuals, both highly present and representative of contemporary culture.

Bandcamp Daily  your guide to the world of Bandcamp

Guests include Kassa Overall and Muriel Grossman, plus an LP of the week by Van Hunt.